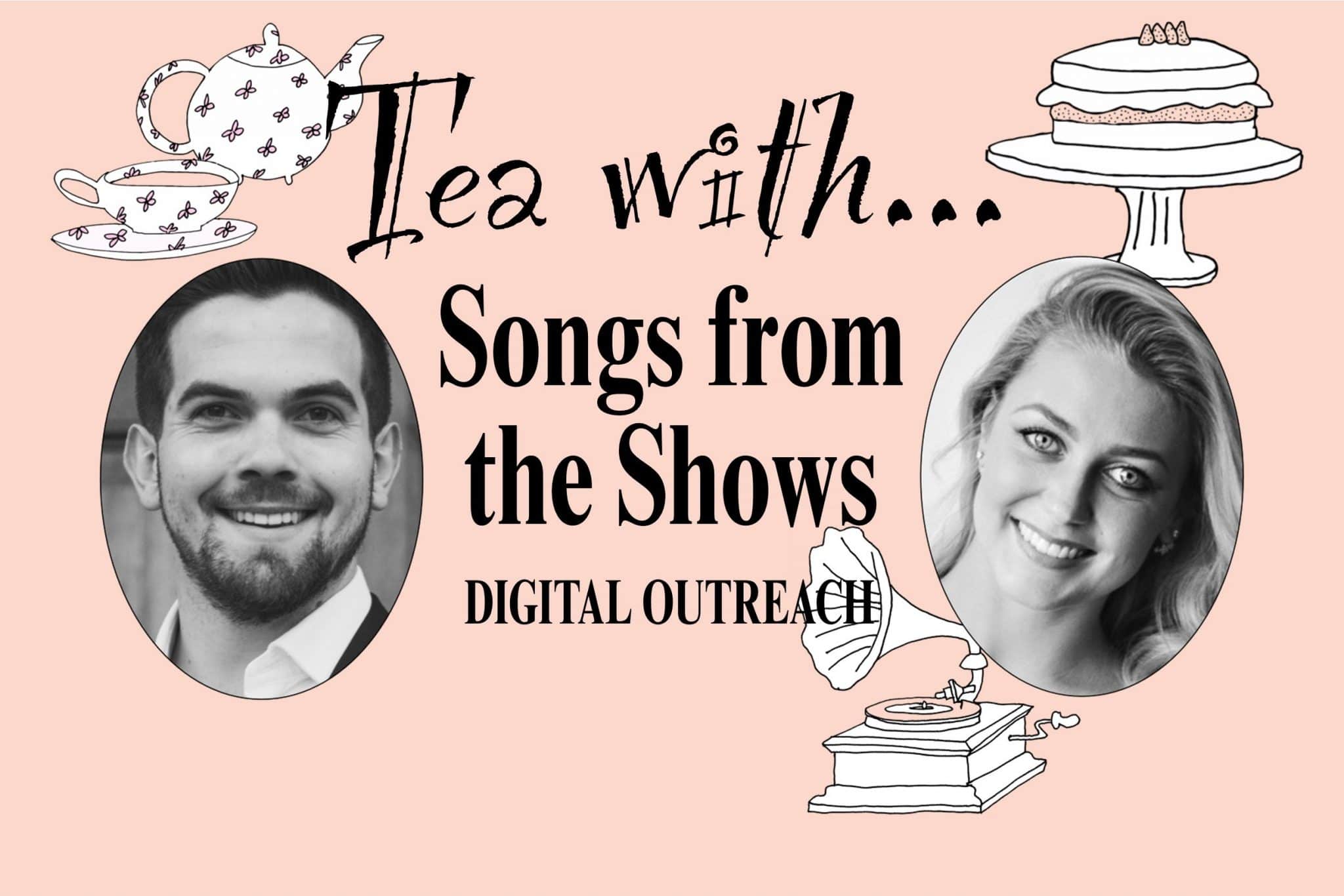 TEA WITH… SONGS FROM THE SHOWS – DIGITAL OUTREACH

“What a lovely thing to watch on a grey afternoon… I’ve just had a lovely time, drinking my lunch time glass of sherry – a toast to your 2 gorgeous singers, followed by a delicious tea all for me!! It really was so good for the morale. I’m getting a bit fed up with being locked down… I loved all the different settings the singers had – wonderfully produced.”

“Thank you so much for this truly wonderful production of Tea with Songs from the Shows. I thoroughly enjoyed it. A great selection of music with two singers with fantastic voices and personalities to match. I shall look forward to your next ‘Tea’. Kind regards, and keep up the good work”.

“We have really enjoyed today’s concert – thank you so much to everyone at Clonter. It really cheered us both up – nearly as good as actually being at a live performance. The cakes were delicious…”

Last March the storm was brewing, and it was the last time we were able to welcome you into the theatre for afternoon tea, but with one of the singers who took part in that rather historic event we went on quite a journey. He teamed up with another singer and together they created, complete with costumes and props, a rather magical online show, turning a negative into a positive. This show was watched by 797 people, with their rendition of We’ll Meet Again being watched individually 675 times!

If you fancy a treat, this comes highly recommended.

Anything You Can Do – https://youtu.be/x5VRdfqO7QA

Originally from the Welsh coastal town of Rhos-on-Sea, John Ieuan Jones recently graduated from the masters course at the Royal Northern College of Music with distinction, where he studied with Matthew Best. His studies were generously supported by the Drapers’ Company, the D’Oyly Carte Trust, George Henry Peters Scholarship and the Gwilym Gwalchmai Jones Award. During his time at the college, he sang several principle roles including Harry Easter in Street Scene, Pandolfe in Cendrillon, Lord Ellington in La Vie Parisienne and Watchful in The Pilgrim’s Progress. Whilst at college, he also worked at Buxton Festival Opera and Longborough Festival Opera, and since graduating has sung the title role in Krása’s Brundibar for Welsh National Opera and a Flemish Deputy in Don Carlo for Grange Park Opera. Ieuan is a busy and in demand concert singer having performed throughout the UK, in Europe and the USA. Recent highlights have included an Opera Gala at The Bridgewater Hall, making his solo debut at The Royal Albert Hall at the London Welsh Festival of Male Choirs, guest soloist at the North America Festival of Wales in Washington DC and last year shared the stage with Sir Bryn Terfel at the Wales Millennium Centre in the opening concert of the National Eisteddfod of Wales. His many awards and scholarships including the Andrew Lloyd Webber Foundation Scholarship, the Help Musicians UK Sybil Tutton Award, the Manchester Welsh Society Award, the RNCM James Martin Oncken Song Prize, Second Prize in the Elizabeth Harwood Memorial Prize at the RNCM and the Dunraven Singer of the Year competition. Ieuan has also had countless successes at National and International Eisteddfodau in Wales, having won the prestigious Osborne Roberts Memorial Prize, the Wilbert Lloyd Roberts Memorial Scholarship, and last year winning the major prize at the National Eisteddfod, the W Towyn Roberts Memorial Scholarship. He is a familiar face on Welsh television channel S4C, frequently appearing and performing on programmes such as ‘Noson Lawen’ and ‘Heno’ and his recordings include Harry Sherwood in Cellier’s Dorothy with Victorian Opera conducted by Richard Bonynge, now available on Naxos CD. Ieuan is also an accomplished harpist, having performed for the Prime Minister and members of the Royal family. His future engagements include Masetto in Don Giovanni with The Merry Opera Company, baritone soloist for Vaughan Williams Fantasia on Christmas Carols and Finzi’s In Terra Pax in Bangor Cathedral, guest soloist at the St Gauderic Music Festival in France and in April will fly to Canada to perform in the Ontario Welsh Festival.​ Sadly, all future engagements have been cancelled/postponed due to coronavirus.

Naomi is a mezzo-soprano from Suffolk with a Master of Music in Performance degree and a Bachelor of Music degree from the Royal Northern College of Music. She studies under the tutelage of Louise Winter, is a part of the Opera North Mentor Scheme and is an Associate Artist for SoundUp Opera. Last year she was a Bursary Recipient for the Opera Awards Foundation and has received a number of other awards.  Naomi’s most recent operatic performances at the RNCM include: Poulenc’s Dialogues des carmélites (Soeur Martha), Vaughan William’s The Pilgrim’s Progress (Madam Bubble), Puccini’s Suor Angelica (Maestra della Novizie), Offenbach’s La Vie Parisienne (Clara), Kurt Weill’s Street Scene (Cameo role) and Benjamin Britten’s A Midsummer Night’s Dream (Peaseblossom). Last summer Naomi performed for Buxton’s International Opera Festival in the operas Georgiana (multiple composers) covering the role of Grey, and in the chorus of both Tchaikovsky’s Eugene Onegin and Caldara’s Lucio Papirio Dittatore. She also premiered the brand new opera Dotter Of Her Father’s Eyes by Gary Lloyd, singing the title role, at the Dublin 2019 WorldCon, held in the Convention Centre Dublin and has just finished working with Opera North on their production of Turn of the Screw by Britten. Naomi has just finished a project with Clonter, which she is very proud of and is working on a new commission with Gary Lloyd which is set to perform in the Chester Storyhouse and the Lunbury Theatre (ROH).  As a regular concert performer, Naomi’s highlights are performing as guest soloist at the International Opera Awards 2019 (Sadler’s Wells Theatre in London), singing Mozart repertoire with the Hallé Orchestra  (Bridgewater Hall), and performing a solo recital for Buxton Opera House. Last year Naomi was a finalist in the prestigious Frederic Cox competition at the RNCM and in the same month made her recording debut as soloist in Sullivan Songs alongside David Owen Norris.

“Thank you so much for the delicious cakes and concert. This thoughtful gesture meant so much in these isolating times. Looking forward to hopefully seeing you all very soon.”
Rossendale Trust

“Brilliant, thank you! So magical. John and Naomi, thank you for sharing your gift of voices with us . Hugs”.
Margaret

“Forgot to thank you for the fabulous cakes . Also in my e mail I need to say Alban fell asleep when John was singing  Edelweiss. Anyway tell John not to sing it to someone if they are driving. Thank you so much again”.
Melanie

“On behalf of the Rossendale Trust Apt 6, we would like to convey our heartfelt thanks for the fabulous cakes & streaming of the show. Christine, Trevor, Richard and Marlene enjoyed it so very much”.
Julia, Rossendale

“Thanks so much – we all really enjoyed the concert. We really appreciated our welcome by name and Mum really enjoyed the songs she had chosen – and all the others!  We sang along and smiled a lot. We hope to be back with you in person very soon”.
Margaret
.

“We have really enjoyed today’s concert – thank you so much to everyone at Clonter. It really cheered us both up – nearly as good as actually being at a live performance. The cakes were delicious. Special thanks must go to Naomi and Ieuan  for their polished performances. We loved all the songs, the singing and presentation were lovely. We’ve had a lovely afternoon, thanks to Clonter”.
Angela and Terry

“We’re just back from our virtual concert. How lovely it was and how fabulous were their voices. Everyone must have put so much hard work into it. It was worth it. Thank you. See you in the by and by”.
Lin and Nick

“We’ve just had our afternoon tea with Ieuan and Naomi. We enjoyed every song and we thought Ieuan and Naomi were both excellent. The sound quality was superb and added to the whole experience. The settings were equally lovely and complemented the performances and the technology married the duets together beautifully. We’re now determined to get out of lockdown, I’m shielding, and to come back to Clonter for the Opera Gala in November and the next afternoon tea concert whenever it is. Thank you very much for putting this together”.
Mary and Ruth

“What a lovely thing to watch on a grey afternoon… I’ve just had a lovely time, drinking my lunch time glass of sherry – a toast to your 2 gorgeous singers (on an unusually grey day), followed by a delicious tea all for me!! It really was so good for the morale. I’m getting a bit fed up with being locked down… I loved all the different settings the singers had – wonderfully produced.”
Alison

“Thank you so much for this truly wonderful production of Tea with Songs from the Shows.  I thoroughly enjoyed it.  A great selection of  music with two singers with fantastic voices and personalities to match.  I shall look forward to your next “Tea”. Kind regards, and keep up the good work”.
John

Having presented our digital outreach programme for free for the first half of Covid-19, we are continuing to adopt a mechanism that is helping keep the prospect of theatres reopening globally a possibility, and that new content is purchased on a ‘Pay What You Feel’ basis. This also enables us to offer this FREE to Friends and Patrons of Clonter*.

There is no booking fee applicable for this event.

This event will be broadcast ‘live’ at 4pm on Thursday 11th March, but the show will be available for one week following broadcast.

If you have any queries, please contact our box office – boxoffice@clonter.org. Please be aware that the box office is currently only being manned on a Wednesday and Friday.

*If you are a Friend or Patron, a link will be sent to you the day before the event, i.e. it is not necessary for you to book.

Tea is available to purchase – Enquiries to boxoffice@clonter.org