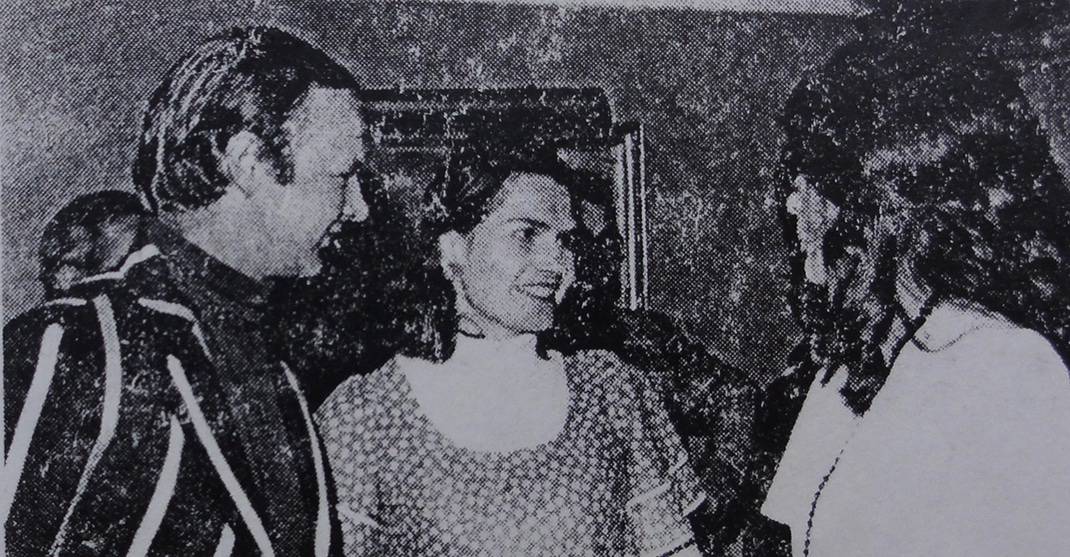 In July 1974 Jeffery Lockett and his wife Anita were inspired to host a charity concert at their home, Clonter Farm in Cheshire. Friends and neighbours were invited to come to an “Operatic Picnic” in aid of Cancer Relief. The performers included Jeffery Lockett and fellow members of the Abbey Opera Group led by Mary Hill.

The auditorium was constructed in a barn which had previously been used to store hay, livestock and machinery. Tiered seating was created with bales of hay and audiences were advised to bring rugs and bug lotion. Hay fever sufferers sat near the fire escapes. The evening was a great success and became an annual event. Running the “Box Office” out of a shoe box on the kitchen table, Jeffery and Anita used their combined skills to run the “Operatic Picnics” for the next 8 years.

Viola Grosvenor, Duchess of Westminster became Clonter’s first Patron followed by Sir Charles Groves and latterly Sir George Christie from 1998-2014. Early supporters included the music critic Michael Kennedy CBE who championed Clonter for many years and strong links were formed with teachers and emerging artists from The Royal Northern College of Music in Manchester. By 1983 Clonter’s operatic picnics had become firmly established and there was a demand for more performances. Jeffery set about converting the barn into a permanent theatre which now comprises of a 400 seat auditorium, with undercover dining facilities and a licensed bar accompany the stage and orchestra pit.

The physical development of the barn stimulated a reassessment of Clonter Farm’s musical ambitions. It was decided Clonter should become a charity and a stepping stone for emerging singers between their conservatoires and the profession. An educational outreach programme for schools in the North West was also started. An active board of Trustees raised funds to help Clonter Opera Farm launch its first Opera Studio with Leonard Hancock as Music Director. He and Wyn Davies coached the singers, Patrick Libby, Sally Day, Patrick Mcguigan and the legendary Sheila Barlow were amongst the early stage directors. Music Directors, Michael Rosewell, Anthony Legge and latterly Clive Timms succeeded Leonard Hancock. Simon Keenlyside, Mary Plazas and Amanda Roocroft came to Clonter whilst still students at The RNCM. Simon later became President of Clonter Farm Music Trust.

In 1989 Clonter performed Eugene Onegin, this was the first time the opera studio put on a complete opera. The decision to concentrate on one opera instead of excerpts was a result of the success of the previous year’s course when the opera studio performed the one act opera – Il Tabarro which resulted in two of the cast receiving excellent first commissions from English National Opera.

However, The Clonter stage has never been exclusive to Opera and provides a diverse programme of musical events. The celebrated blind pianist George Shearing was the first jazz artist to perform at Clonter in 1980. Other well known artists such as Cleo Lane, John, Jacqui and Alec Dankworth and most recently James Pearson (Artistic Director at Ronnie Scotts) were to follow. Whilst Master of the Musicians’ Company, Jeffery Lockett introduced The worshipful Company of Musicians’ Jazz Award which continues to this day. Wyn Davies first introduced musical comedy and cabaret to Clonter in 1984 and Gospel music was to follow with the London Adventist Coral conducted by Ken Burton.

Clonter has also embraced collaborations with organisations such as the Biddulph Folk Club, The Great British Music Camp and local producer William Whelton, who has brought Panto to the Clonter stage, creating a platform for local children to perform alongside rising stars from the West End. Clonter now aims to provide opportunities for emerging artists in all genres of music whenever possible.

Click the photo above to view the Clonter History Album.