Betty Bannerman was a distinguished mezzo-soprano who enjoyed a career spanning some seven decades, latterly as a teacher. She specialised in French song and was a pupil and friend of the great French mezzo Claire Croiza. 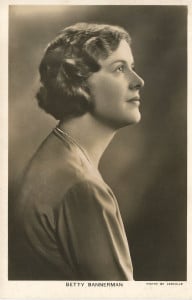 Bannerman’s own voice ranged from low G to the high A flat. She had a rich, warm tone and exemplary diction in whatever language she was singing. A regular soloist at the Three Choirs Festivals before and after the Second World War, she sang in the Elgar oratorios and in choral works by Kodáy, Lambert, Mendelssohn and Bliss. She gave more than 200 solo recitals for the BBC; she was a soloist in Bach Passions conducted by Vaughan Williams at the Leith Hill Festivals and worked often with such conductors as Ansermet, Beecham, Goossens and Boult. Besides French song, she excelled in German Lieder, Old Italian songs and the English repertoire from Purcell to Britten.

Charlotte Elizabeth Bannerman was born at Cheltenham on April 19, 1902. She spent her early years in Kashmir and on one occasion narrowly escaped being eaten by a sacred crocodile. After that, she used to say the musical profession held no terrors.

In 1920 Bannerman went to Paris to study singing with the tenor Lloyd d’Aubigné. Two years later she returned to London to take lessons with d’Aubigné’s pupil Robert Tait, to whom she attributed much of her success.

Bannerman then spent six months in Berlin with Lilli Lehmann and made a special study of lieder with von Zur Mühlen. Her first important London recital was at the Aeolian Hall in 1927. The next year she attended a Croiza recital, which made such an impression that she immediately asked to become her pupil, and for the next 10 years studied with her for a month every year.

In 1937 she married Derek Lockett, a member of The Musicians’ Company. They settled in a 17th Century farmhouse in the Chilterns, and converted a timbered barn into a music room where they put on song recitals and chamber concerts.

During the Second World War, while bringing up her two sons and looking after evacuees, she added a busy schedule of recitals for the Council for the Encouragement of Music and the Arts to her normal engagements. After the war they moved to Cheshire.

Thereafter she sang mainly in the North of England, until she retired in 1958 and took up teaching,

A friendly woman with a ripe sense of humour and keen judgment, Betty Bannerman proved an inspiring teacher. She believed strongly in encouraging her pupils to regard other forms of artistic endeavour – painting, poetry, literature and drama – as part of their musical training.

At the invitation of Ida Caroll, Principal of the Northern School of Music, Bannerman established a class in French Song, which she continued after the School was incorporated into the new Royal Northern College of Music in 1972. She also established and endowed an annual Claire Croiza Prize at the RNCM – of which she was elected a Fellow in 1981. Latterly she arranged recitals for young artists in the Music Room at Clonterbrook House. From these came the impetus for the opera performances and master-classes, which – conducted in the barn of her son Jeffery’s neighbouring Clonter Farm – have become a national institution.